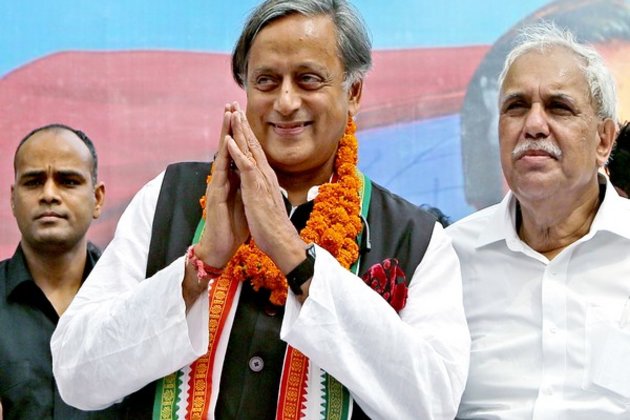 New Delhi [India], October 3 (ANI): Congress presidential candidate Shashi Tharoor on Monday welcomed guidelines laid down by the party's Chief Election Authority asking the contestors to take "utmost care" to ensure "no mala-fide campaign" against the two competitors as it would bring "disgrace to the party".

The series of guidelines stated by Congress' Central Election Authority chairman Madhusudan Mistry for the party's internal polls scheduled to be held on October 17, said, "Utmost care must be taken to ensure that there is no mala-fide campaign against any candidate. The same would bring disgrace to the party. The sensitivity of the election process must be upheld at any cost."Mallikarjun Kharge and Shashi Tharoor are up against each other in the polls.

It was also stated that no leader of the party holding an organisational post can participate in the campaign process of the elections. It asked the party leaders to tender their resignations first "if they wish to support any candidate".

"Mallikarjun Kharge and Shashi Tharoor are contesting the election of Congress President in their personal capacity. Therefore, delegates are free to elect any one of them, as per their choice, through ballot paper. AICC general secretaries/ in-charges, secretaries/ Jt secretaries, Pradesh Congress Committees (PCC) presidents, Congress Legislative Party leaders, heads of frontal org., chiefs of depts./cells and all official spokesperson shall not campaign for or against contesting candidates. If they wish to support any candidate they must first resign from their organisational post, after that they participate in the Campaign process," stated the guidelines.

Issuing a clarification over the guideline, Tharoor said that he resigned as the head of the All India Professionals' Congress last month.

"For those asking: I have already submitted my letter of resignation as head of All India Professionals' Congress to the Congress President last month," Tharoor tweeted.

The guidelines also prohibited the candidates from using vehicles to bring the voters or resorting to any "undesired pamphleteering or any other kind of publication propaganda" during the elections.

"Controverters of these procedures shall render the candidatures election invalid and make them liable for disciplinary action," it stated.

The party's Chief Election Authority also made the Pradesh Returning Officer (PRO) as the polling officers of the respective Pradesh Congress Committees (PCCs).

"Pradesh Returning Officer (PRO) will be the Polling Officer of their respective PCCs. He/ She shall be responsible for keeping order at the polling stations and to see that the election is fairly conducted," said the guideline.

"All PCC Presidents shall extend courtesy to the candidates during their visits to the respective states," it added.

The election for the Congress president will be held on October 17 and the results will be declared on October 19. (ANI)