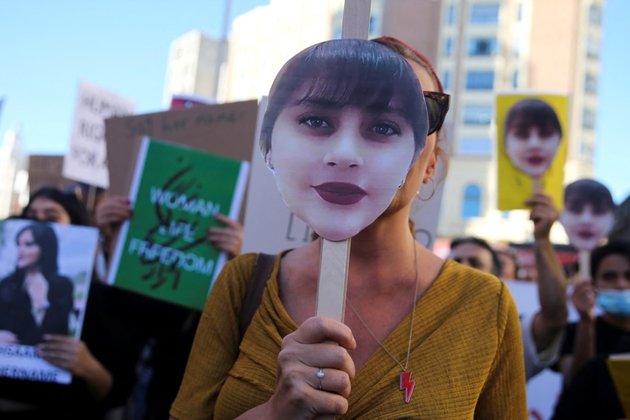 Swiss police have fired rubber bullets as protesters demonstrated outside Iran's embassy in Bern, and two men climbed over the embassy's fence and pulled the Iranian flag from a flagpole.

No one was injured in the October 1 demonstrations, which were one of dozens held around the world in solidarity with protests being held inside Iran over the death of a 22-year-old woman while in police custody.

The woman, Mahsa Amini, died on September 16 after she was detained for days by the morality police for allegedly wearing her headscarf too loosely.

Since her death, Iran has seen rare outburst of sustained public anger, driven in large part by Iranian women.

In Bern, police said they used rubber bullets after several other protesters at the unauthorized demonstration also tried to enter the embassy's yard.

The two men who entered the embassy premises were detained, police said.

Rallies were held on October 1 in 159 cities around the world, according to an Iranian human rights organization.

Iran has blamed outside forces for the protests, which are some of the largest and most sustained protests in the country in years.

A Norway-based rights group said at least 92 people have been killed across Iran amid the ongoing police crackdown on the Amini protests.

'The international community has a duty to investigate this crime and prevent further crimes from being committed by the Islamic Republic,' Mahmood Amiry-Moghaddam, director of Iran Human Rights, said in a statement on October 2.

Activists and relatives say Amini was killed by blows to the head while she was in police custody. They've rejected authorities' claim that she had suffered a heart attack.

News of her death struck a nerve in a country already wracked by social unrest over poor living conditions and economic hardship. That hardship has been exacerbated by crippling U.S. economic sanctions imposed in response to Iran's nuclear program.

With reporting by RFE/RL's Radio Farda, AFP, and Swissinfo.ch